How does a carbon tax affect Britain’s power generation composition? 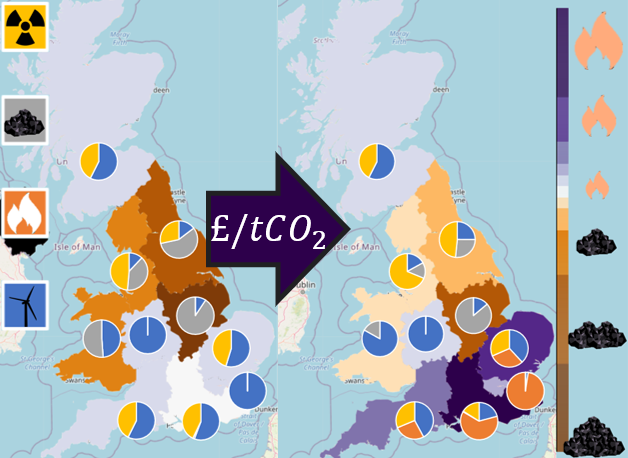 The purpose of this paper is to determine the effect of different carbon tax rates on the power generation composition of Britain. This was accomplished via a regional, geospatial model, accounting for regional loads, transmission losses and generators of Britain’s current energy infrastructure. This regional model is also compared to a pure dispatch, nationally aggregated model which considers only costs on the generator side inclusive of the carbon tax, thus allowing the effect of including geospatial conditions to be identified. The effect of this tax (in both the geospatial and nationally aggregated cases) is a transition from coal to combined cycle gas turbine (CCGT) generated power to fulfil demand unmet by nuclear or renewable sources. The more sophisticated regional model, however, differs from the nationally aggregated case by having a significantly larger window of carbon tax rates over which this coal to CCGT transition occurs. Due regional differences in demand and installed capacity technology types it is determined that more than 50% of this transition occurs prior to CCGT becoming more economical than coal from a pure dispatch (nationally aggregated) perspective. Primarily due to CCGT generators typically being closer to larger southern loads than northern coal, transmission losses and the economic disincentive of a carbon tax combine in encouraging this transition. The transition window, therefore, is not only broadened by the consideration of geospatial effects, but furthermore, this broadening significantly and disproportionately occurs by decreasing the lower bound of this transition window. These findings validate the significance of utilising a geospatial model, particularly of regional resolution. They further identify the deployment of current energy infrastructure in Britain under differing carbon tax regimes and by extension, the transition window (found to be from coal to CCGT) an increasing carbon tax rate would create. These results bear not only significance in understanding the UK’s currently incrementing (top-up) carbon tax rate, but also shed light on future policies due to the UK’s leaving of the EU’s Emissions Trading Scheme (ETS), with immediate plans to continue with a domestic carbon tax and trading scheme. Thus, these results hold importance in the understanding the effect of carbon taxation on existing infrastructure, energy modelling and national policy in the UK.