Welcome from the Computational Modelling Group

Welcome to the website of the CoMo Group. We develop and apply modern numerical methods to problems arising in Chemical Engineering. The overall aim is to shorten the development period from research bench to the industrial production stage by providing insight into the underlying physics and supporting the scale-up of processes to industrial level.

The group currently consists of 21 members from various backgrounds. We are keen to collaborate with people from both within industry and academia, so please get in touch if you think you have common interests.

The group's research divides naturally into two inter-related branches. The first of these is research into mathematical methods, which consists of the development of stochastic particle methods, computational fluid dynamics and quantum chemistry. The other branch consists of research into applications, using the methods we have developed in addition to well established techniques. The main application areas are reactive flow, combustion, engine modelling, extraction, nano particle synthesis and dynamics. This research is sponsored on various levels by the UK, EU, and industry. 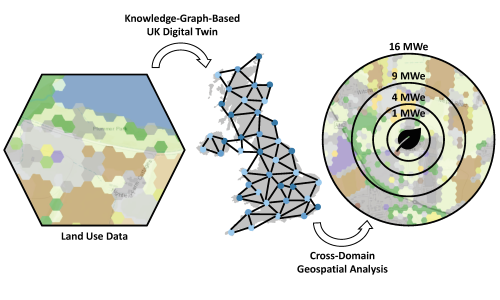 Preprint 276, ''Universal Digital Twin - Land Use'', has been published!


This paper develops an ontological description of land use and applies it to incorporate geospatial information describing land coverage into a knowledge-graph-based Universal Digital Twin. Sources of data relating to land use in the UK have been surveyed. The Crop Map of England (CROME) is produced annually by the UK Government and was identified as a valuable source of open data. Formal ontologies to represent land use and the geospatial data arising from such surveys have been developed. The ontologies have been deployed using a high-performance graph database. A customised vocabulary was developed to extend the geospatial capabilities of the graph database to support the CROME data. The integration of the CROME data into the Universal Digital Twin is demonstrated in a cross-domain use case that combines data about land use with a geospatial analysis of scenarios for energy provision. Opportunities for the extension and enrichment of the ontologies, and further development of the Universal Digital Twin are discussed. 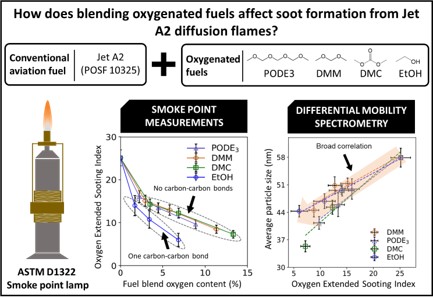 Preprint 274, ''How does blending oxygenated fuels affect soot formation from Jet A2 diffusion flames?'', has been published!


Four oxygenated fuels: ethanol (EtOH), dimethyl carbonate (DMC), dimethoxy-methane (DMM) and polyoxymethylene dimethyl ether (PODE3) were blended with Jet A2 to investigate the sooting behaviour of the fuel mixtures. The smoke point was measured using wick-fed laminar diffusion flames as per the ASTM D1322 standard. The oxygen extended sooting index (OESI) was calculated to determine the sooting tendency of each mixture. Colour-ratio pyrometry and differential mobility spectrometry were used to measure the soot volume fraction (fv) and particle size distribution (PSD). The addition of oxygenated fuels caused a strong reduction in sooting tendency (i.e. OESI) at low blend strengths (5%) and a weaker linear reduction at higher blend strengths (10% and 20%). Each mixture showed a similar reduction at a given mole fraction of oxygenated fuel. The OESI broadly correlated with the soot volume fraction and particle size measurements. Increasing blend strengths resulted in smaller particles at the tip of the flame. The average particle size at the tip was influenced by the oxygen content but not the molecular structure of the oxygenated fuels, whereas the soot volume fraction in the wings was influenced by boththe molecular structure of the oxygenated fuels and the oxygen/carbon ratio of the mixture. For the first time, fv and PSD have been reported for flames produced using Jet A2 blends in an ASTM D1322 lamp. The ability to relate data gathered using the ASTM D1322 standard for the sooting behaviour of different mixtures is going to be increasingly important as the aviation industry seeks to switch to sustainable fuels. 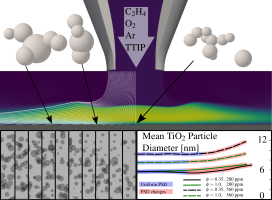 
The formation of titanium dioxide (TiO2) nanoparticles from titanium tetraisopropoxide (TTIP) in premixed, jet-wall stagnation flames was simulated to investigate the variation of the particle properties as a function of deposition radius. Two different TTIP loadings (280 and 560 ppm) were studied in two flames: a lean flame (equivalence ratio, ϕ=0.35) and a stoichiometric flame (ϕ=1.0). First, the growth of particles was described using a spherical particle model that was fully coupled to the conservation equations of chemically reacting flow and solved in 2D using the finite volume method. Second, particle trajectories were extracted from the 2D simulations and post-processed using a hybrid particle-number/detailed particle model solved using a stochastic numerical method. In the 2D simulations, the particles were predicted to have mean diameters in the range of 3 to 10 nm, which is consistent with, but slightly less than experimental values observed in the literature. Off-centreline particle trajectories experienced longer residence times at higher temperatures downstream of the flame front. Two particle size distribution (PSD) shapes were observed. In the lean flame, a bimodal PSD was observed due to the high rates of inception and surface growth. In contrast, the stoichiometric flame was dominated by coagulation and the particles quickly attained a self-preserving size distribution. The PSDs were found to be different beyond a deposition radius of approximately one and a half times the nozzle radius due to a small degree of aggregation; this may impact the synthesis of nanoparticles using jet-wall stagnation flames for novel applications. 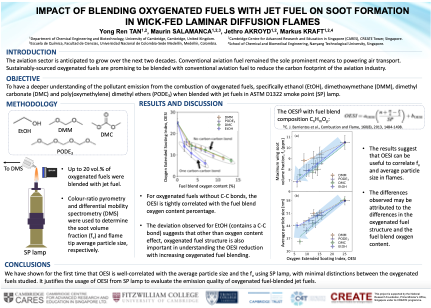 PhD student Yong Ren Tan has presented an e-poster titled 'Impact of blending oxygenated fuels with jet fuel on soot formation in wick-fed laminar diffusion flames' during the European Combustion Meeting 2021. This year’s conference ran for two days virtually, from 14th April until 15th April 2021 and was based in Naples, Italy. It has hosted five plenary lectures with more than 250 e-poster sessions. The group of e-poster session that Yong Ren participated was under the 'Soot, nanoparticles, PAH and other large molecules 1' session.

Preprint 269, "The role of oxygenated species in the growth of graphene, fullerenes and carbonaceous particles", has been published!

Preprint 267, "Self-assembly of curved aromatic molecules in nanoparticles", has been published!


The self-assembly and structure of nanoparticles containing curved polycyclic aromatic hydrocarbon molecules (cPAHs) are investigated using molecular modelling. These polar fullerene-like molecules are receiving increased attention recently due to the steric and electronic properties caused by the inclusion of five-membered ring(s) within their hexagonal lattice. In this work, the curPAHIP potential is extended to describe the interactions between large cPAHs. It is then used within molecular dynamics simulations to produce nanoparticles containing cPAHs. Structural and energetic metrics, including diameter, density, intermolecular spacing, coordination number, alignment angle, radial distance, and energy value, are used to analyse systems containing cPAHs of different sizes and ratios, and containing flat PAHs or ions. Homogeneous cPAH particles are more tightly packed than their flat PAH counterparts, with large cPAHs displaying stacked columnar configurations absent in nanoparticles containing small cPAHs. Mixing cPAHs of different sizes disrupts the ordered mesophase and forms a core-shell structure in which the larger molecules make up the core and the smaller molecules comprise the shell, although this partitioning is less distinct compared to flat PAHs. In addition, the presence of flat PAHs and ions within cPAH nanoparticles promotes distinct arrangements dominated by weak dispersive interactions and strong electrostatic interactions, respectively. 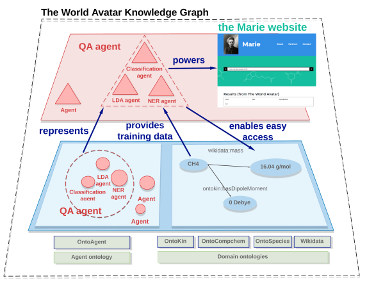 Preprint 266, "A Question Answering System for Chemistry", has been published!


This paper describes the implementation and evaluation of a proof-of-concept Question Answering system for accessing chemical data from knowledge graphs which offer data from chemical kinetics to chemical and physical properties of species. We trained a question type classification model and an entity extraction model to interpret chemistry questions of interest. The system has a novel design which applies a topic model to identify the question-to-ontology affiliation. The topic model helps the system to provide more accurate answers. A new method that automatically generates training questions from ontologies is also implemented. The question set generated for training contains 80085 questions under 8 types. Such a training set has been proven to be effective for training both the question type classification model and the entity extraction model. We evaluated the system using the Google search engine as the baseline. We found that it can answer 114 questions of interest that Google or Wolfram alpha can not give a direct answer to. Moreover, the application of the topic model was found to increase the accuracy of constructing the correct queries.

Preprint 265, "ElChemo: A Cross-Domain Interoperability in a Chemical Plant", has been published!


In this paper we propose a novel framework capable of establishing machine-to-machine (M2M) interactions between chemical and electrical systems in the industry. The semantic framework termed as ElChemo addresses the challenges in M2M interaction of entities from different silos, such as differences in the domains’ behaviour, the heterogeneities arising from different vocabularies and software. The OntoTwin ontology has been developed based on OntoPowSys and OntoEIP ontologies, which are parts of an intelligent platform called the "J-Park Simulator (JPS)". The ElChemo framework uses Description Logic (DL) and SPIN reasoning techniques to establish the interaction between the chemical and electrical systems in a plant. As use-case we study a depropaniser section of a chemical plant and its corresponding electrical system as a use case scenario to demonstrate the interoperability between the two silos within the ElChemo framework. The results indicate that the proposed approach can achieve significant economic benefits. 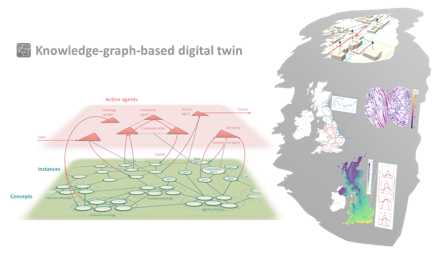 Preprint 264, ''The National Digital Twin of the UK – a knowledge-graph approach'', has been published!


It is widely recognized that combatting climate change will require massive changes in infrastructure and energy systems. Digitalization will offer new ways to design and operate infrastructure and will form an important part of the response to this challenge. Digital twins composed of multiple interacting distributed entities that share data and combine to answer complex questions have been identified as a key aspect of this move towards digitalization. However, it is far from clear how to implement such a digital twin. This remains a critical area of research. In this paper we propose a solution to the implementation problem based on a dynamic knowledge graph developed as part of the World Avatar project. We present the concept and preliminary evidence from case studies in Singapore.

In 2016, Prof. Markus Kraft was awarded the Friedrich Wilhelm Bessel Award and is therefore eligible to host Feodor Lynen Research Fellows sponsored by the Alexander von Humboldt Foundation. The Feodor Lynen Research Fellowship covers the salary and travel expenses of researchers from Germany to work at the host institution for 6-24 months. In addition, the fellowship enables the successful candidate to apply for alumni sponsorship from the Humboldt Foundation after the end of the fellowship and become part of their international network of academics.

If you are interested in working at the University of Cambridge and in joining the CoMo group as a post-doctoral researcher, please check your eligibility on the official Feodor Lynen Research Fellowship website and familiarise yourself with the application procedure. You will need to write a research proposal that aligns with your professional expertise. The topic might be of computational or experimental nature but should lie within the research areas of the CoMo group.