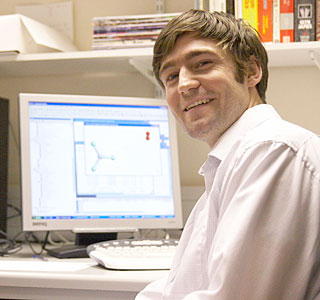 Raphael spent just over three years with the Computational Modelling Group from 2007 to 2011. He originally graduated in 2006 with a degree in physics from The Cavendish Laboratory in Cambridge, and then switched departments in order to work on the combustion synthesis of titanium dioxide nanoparticles. Using computational quantum chemistry (mainly density functional theory) he worked to improve understanding of this important industrial process.

Titanium dioxide is a large bandgap semiconductor with the highest refractive index of almost any material. The primary application is as a white pigment with over four million tonnes produced annually. Its unique properties have also generated interest in applications as a photocatalyst and in dye sensitized solar cells.

Raphael investigated the influence of aluminium on the physical properties of TiO2. The image to the left shows an electron density isosurface in a unit cell of Al doped rutile.

Raphael spent time at both St John's College and St Edmund's College and was sponsored by Tioxide Europe Limited. He has no hobbies or interests.

100: Theoretical insights into the surface growth of rutile TiO2

85: First-principles thermochemistry for the combustion of TiCl4 in a methane flame

Theoretical insights into the surface growth of rutile TiO2