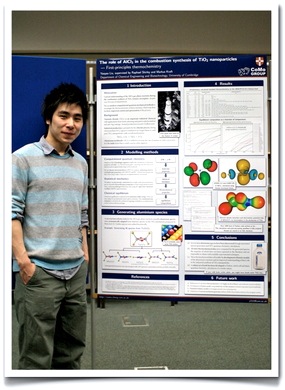 During his time in the CoMo group, Yaoyao used ab initio and density-functional theory techniques in quantum chemistry to investigate the role of gas-phase aluminium species in the combustion synthesis of titanium dioxide (TiO2) nanoparticles from TiCl4.

Titanium dioxide has broad-ranging applications from food colouring and paint to photocatalysts and self-cleaning windows. Annual production currently exceeds 5 million tons, of which the majority is produced by combustion synthesis in the chloride process. Aluminium chloride (AlCl3) is typically added during this process to promote the formation of rutile, a specific crystalline form of TiO2 that has the best pigment properties. However, the mechanism of aluminium as a rutile promotor in the gas phase (as opposed to Al-doped TiO2 crystals) is poorly understood.

The image to the left shows the lowest unoccupied molecular orbital (LUMO) of AlCl3 as calculated by hybrid DFT (at the B3LYP/6-311+G(d,p) level of theory).

Yaoyao graduated from Trinity College in 2009. He now works in the City.

74: First-principles thermochemistry for the combustion of a TiCl4 and AlCl3 mix.