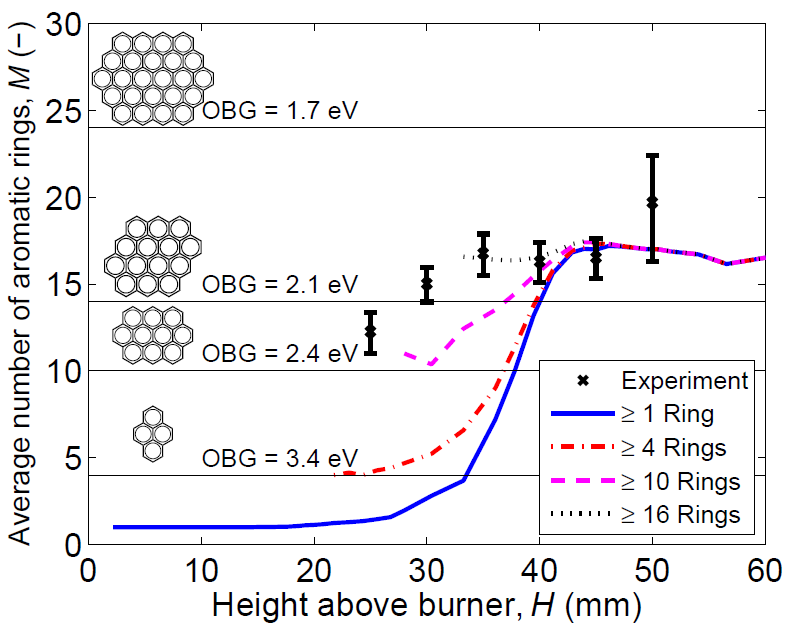 A detailed population balance model is used to perform a parametric sensitivity study on the computed optical band gap (OBG) of polycyclic aromatic hydrocarbons (PAHs) in a laminar co-flow ethylene diffusion flame. Assuming that the OBG of PAHs in soot can be estimated by the energy difference between the highest occupied and lowest unoccupied molecular orbitals in single PAHs, OBG may be correlated with the number of aromatic rings in PAHs. This allows insights into which are the key species involved in the formation of soot. PAH size distributions are computed along the centreline and in the wings of the flame. We compare our simulations with experimentally determined soot volume fraction and OBG (derived from extinction measurements) from the literature. It is shown that the model predicts reasonably well the soot volume fraction and OBG throughout the flame. We find that the computed OBG is most sensitive to the size of the smallest PAH which is assumed to contribute to the OBG. The best results are obtained accounting for PAH contribution in both gas and particle phases assuming a minimum size of ovalene (10 rings). This suggests that the extinction measurements show a significant absorption by PAHs in the gas phase at the visible wavelength that is used, which has been demonstrated by experiments in the literature. It is further shown that PAH size distributions along the centreline and in the wings are unimodal at larger heights above burner. Despite the different soot particle histories and residence times in the flame, the PAH size associated with both modes are similar which is consistent with the near-constant OBG that is observed experimentally. The simulations indicate that the transition from the gas phase to soot particles begins with PAHs with as few as 16 aromatic rings, which is consistent with experimental observations reported in the literature.