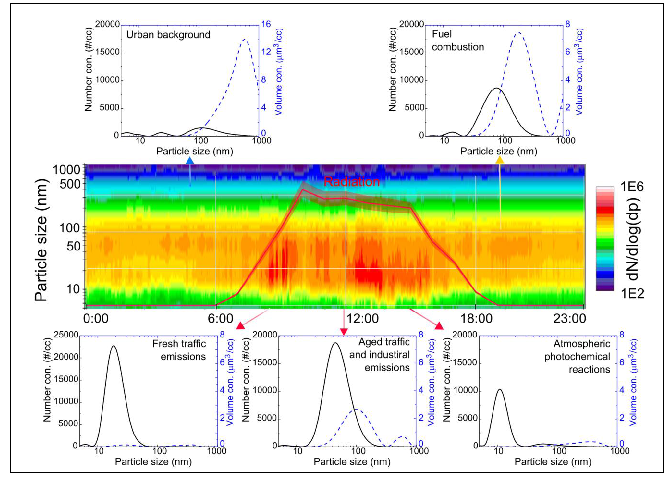 In this study, we carried out high time-resolution measurements of particle number concentration and size distribution (5-1000 nm) in Singapore, which represents a tropical urban environment. The measurements were taken during the southwest monsoon season in 2017 using a fast-response differential mobility spectrometer at a sampling rate of 1 Hz. In the measurement, short-lived nucleation events were found prominent at early afternoon because of the abundant incoming radiation that enhances the photochemical reactions in atmosphere. For the first time in the region, a five-factor positive matrix factorization approach was applied to the size spectra data. Based on PM number concentration, two sources within nucleation mode (<30 nm) were resolved and account for 43.5% of total number concentration, which is higher than the available monitoring data in other big cities. Among the sources, O3-related atmospheric photochemical reactions with peak size at 10-12 nm is a unique factor and prominent in early afternoon nucleation events. The findings of this work can serve as a baseline for assessing influence of local and cross-border airborne PM emissions during various seasons in the future.

Material from this preprint has been published in Environmental Pollution.