A kinetic mechanism for the thermal decomposition of titanium tetraisopropoxide 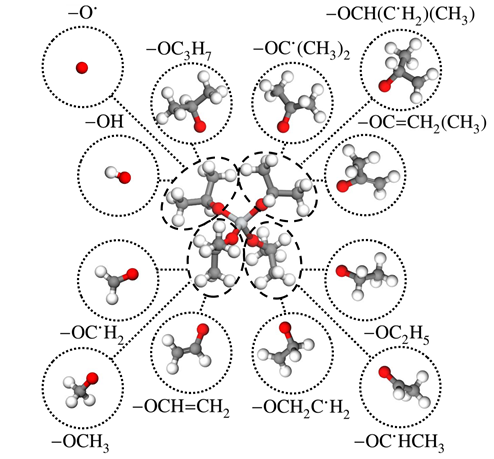 This work presents the first systematically derived and thermodynamically consistent mechanism to describe the thermal decomposition of titanium tetraisopropoxide (TTIP). The mechanism is based on an analogy between the decomposition of the isopropoxide branches and the decomposition of isopropanol. Flux and sensitivity analyses were used to identify the main reaction pathways in the proposed mechanism as the step-wise release of C3H6 via four-member ring transition states, the successive abstraction of CH3 radicals via C-C bond cleavage followed by hydrogen abstraction to form C=C double bonds, and hydrogen abstraction from the isopropoxide methyl groups followed by the release of C3H6. The final decomposition product was titanium hydroxide, Ti(OH)4. Rate constants were calculated using conventional and variational transition state theories for reactions in the first two pathways. The calculated rates are similar to the rates calculated for the corresponding isopropanol reactions, providing support for the analogy with isopropanol. The mechanism was used to simulate the ignition delay of isopropanol and TTIP. Excellent agreement was observed with experimental data for isopropanol. However, the mechanism over predicted the ignition delay for TTIP. The discrepancy was shown to be unlikely to be caused by the modest difference between the true reaction rates for the TTIP system and those assumed based on the analogy with isopropanol. It was found that the sensitivity of the TTIP decomposition to the presence of water must be caused by additional chemical pathways than the ones given by isopropanol analogy.