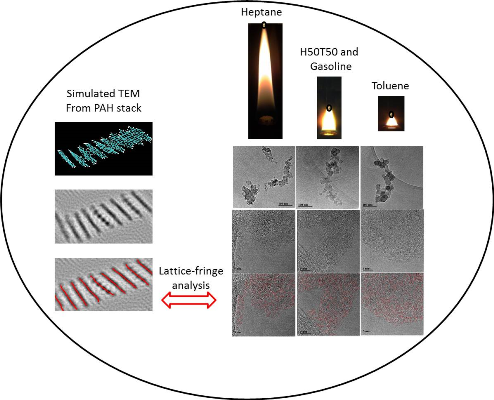 The morphology and nanostructure of soot particles as a function of fuel type in a laminar diffusion flame were studied. The fuels considered were heptane, toluene, the volumetric mixture 50% heptane â€“ 50% toluene and a commercial gasoline. The structural features of soot sampled in the flame were inferred using HRTEM. An image analysis algorithm was developed to calculate the fringe length, tortuosity and inter-fringe spacing from HRTEM images. For the first time, the performance of the algorithm is tested against artificially generated TEM images with known geometries. Heptane flame produced the smaller primary particles followed by the heptane/toluene mixture and gasoline, toluene flame formed the largest particles. Toluene soot exhibits the longer and less curved fringes and more stacked layers. Heptane soot develops a similar degree of order as the aromatic flames but stronger oxidation at the tip reduces the fringe length and increases the tortuousity. There is no significant difference between the nanostructure of heptane/toluene mixture and the gasoline. The main differences in the nanostructure all the soot sampled was the degree of order of the PAHs within each particle. The fringe length was found to be similar for all the fuels, around the size of circumpyrene (C42 H16).